FEATHERY QUARTET – ABOUT
“It is music about life, a continuous suite of dances and narratives, the voice of someone telling her and their story, arrestingly and thoughtfully. You cannot ask for more in music.” – Brian Morton, BBC, Jazz Journal

Feathery Quartet draws its inspiration from diverse musical traditions: 21st Century Music, Middle-Eastern, Jewish, Eastern-European, jazz, Western classical music.
The quartet was born in 2014, performing its first concert in NYC. Over the years we have developed a clear concept, presenting only original material. Based on free improvisation, our musical approach aims at blurring the lines between pre-existing composition and spontaneous invention, between written and improvised sections, resulting in story-telling continuity. Compositions emerge organically from the group’s interactions with one another, with a sense of mutual trust and freedom. Certain “looseness” is even required in unison lines, creating two or three dimensions of the same melody, so “tightness” is not our goal. The ensemble’s name suggests lightness, flexibility, readiness to drift in the new directions – like a feather in the wind.
It can be said that Feathery has achieved a singular sound as a collective.
In the words of Dan Morgenstern: “Most impressive quartet – or rather, four equals perfectly attuned to each other. “Collective” is the key word here, for this is is truly musical togetherness, creating a sound all its own”.
Downbeat Magazine describes it: “Rippling energy and sublimely weightless interplay”.
After 4 years of live performance (iBeam, Cornelia Street Underground, Jazz At Kitano, Puffin Cultural Forum, Baha’i Center NYC, Maureen’s Jazz Cellar, Live At The Falcon and other venues) the quartet released an album “Heart Knows” on Fresh Sound Records in 2017. Feathery was selected to showcase at the National Chamber Music Conference (NYC, January 2018). Top-rating reviews followed in All About Jazz, NYC Jazz Record, Downbeat Magazine, Chamber Music Magazine, abroad: Canada, Greece, France, Switzerland, Italy, UK, Germany, was listed among top 50 (Germany-Switzerland), top 100 (NPR Jazz Critics Poll and International Critics Poll), one of the top jazz releases 2018 (Italy).

“We prefer to not have any particular arrangements of our compositions,” Lena Bloch insists. “Jazz doesn’t have to be risk free – on the contrary, I think risk is a great factor! Because I trust the feeling, professionalism and experience of these people, risk and challenge only facilitate the result. The less safe we all feel, the better it is for the music.”

In his liner notes to the album, Dan Morgenstern wrote:
“It is a rare and most pleasant surprise to encounter music that is new and different and find it instantly likable.”

PRESS QUOTES AND LINKS TO ARTICLES
“A marvelous example of the kind of empathy that underlies most great jazz.” – Glyn Pursglove, Music Web International (UK)
~~~~~~~~~~~~~~~~~~
“In spite of its complexity and its intricate layering the music is light as a feather in perception. It leaves such a deep impression that one is quickly tempted to listen to it again.” – Bernard Lefevre, Jazz Halo (Belgium)
~~~~~~~~~~~~~~~~~~~~
“The stunning thing about every performance here is the delicate blend of composed music and spontaneous invention” – Donald Elfman, New York City Jazz Record
~~~~~~~~~~~~~~~~~~~
“Loose but deliberately plotted structures and an air of wistful beauty!” – Giovanni Russonello,
New York Times
~~~~~~~~~~~~~~~~~~~~

“…unwaveringly cohesive…bone-deep gorgeousness…complex, compelling and beautiful, sounds of the highest quality and inspiration laid down by a premier jazz quartet.” – Dan McClenaghan, All About Jazz
~~~~~~~~~~~~~~~~~~~

“Heart Knows finds Bloch and company exploring a musical realm where concepts and preconceived notions fall by the wayside, making room for the spontaneously composed to be seamlessly entwined with evocative, open compositions. As the quartet pushes forward, they are resolved to continue inviting listeners to participate in that mystery.” – Karl Helander,
Chamber Music Magazine
~~~~~~~~~~~~~~~~~~~~

“Tenor saxist and composer Lena Bloch has a gorgeously warm and mellifluous tone, sort of a mix between Lester Young and Warne Marsh, and she uses it to excellent effect..” – George W. Harris, Jazz Weekly

“All of the music contains ideas and executions that point to Lena Bloch’s ability to write poignant melodies.
Each is wonderfully mysterious and atmospheric and every one of the songs has an undertow of raw power that drives their melodies forward.
All are extraordinarily crafted compositions, defining a mood in the space of a bar or two, and take precious little time to completely infiltrate the listener’s mind before letting it go. ” – Raul DaGama, Jazz DaGama, Canada 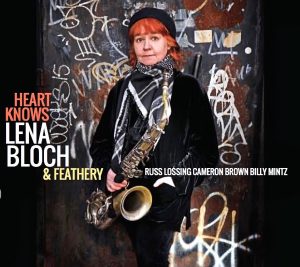